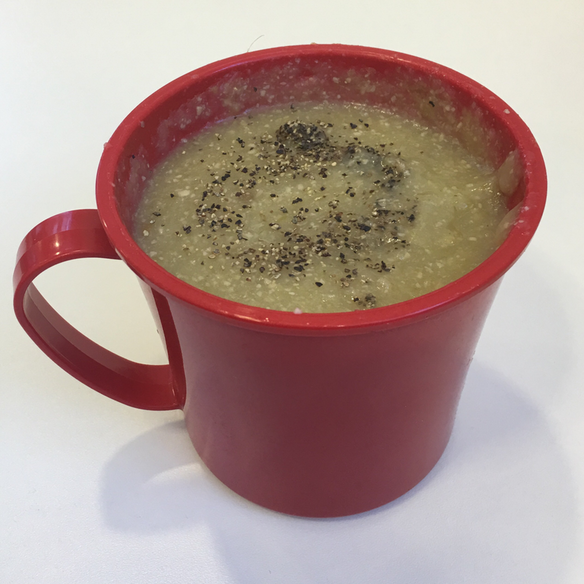 I've played around with lots of different ingredients in the past but one of my favourite soups for a wholesome meal is leek and potato.

This got me thinking, how could I make my soup with a bit more protein and carbs so it could be used to fuel my cycling and walking activities whilst keeping it vegetarian so other friends and family can enjoy? I searched in my local Tesco and came across soya beans and soya flakes. Both would work well in a soup so the purchase was made!

Soya beans are very rich in protein which is one of the reasons vegetarians mix them into their cooking and the flakes can be soaked on hot water to give more of a mince texture. I'm going to experiment more with this in future!

Onto the soup I combined the following ingredients potatoes - any brand works and any type really I went with a white potato but may experiment with others next time. New potatoes would add another flavour to the soup too. Leeks - a great vegetable to add volume without an over powering flavour. Split green peas, these come in dry form and can with the soya products be found in most supermarkets or health shops such as Holland and Barrett. Then the soya beans and flakes.

The soup was simmered for about an hour, just until the potatoes had gone soft. Once blended this gave me a delicious wholesome soup which provided 6 lunches, I added some crusty bread to dip in. Yum!

See the video beloe for a how to make guide and also the ingredients and nutritional values. In a box below the video.

The total values of this recipe depends on the weight of the potatoes and leeks , you can see the protein and carbs per 100g on the foods label

My recipe gave a total of 1300 calories , 214g of carbs, 42g of fibre and 63g of protein I then decided the total soup into portions to work out how much per portion.

The soup is low in fat and sugars and the carbs and protein are great for active people.
Back to Food